Since 2006, Night Flight Concepts has been a pioneer provider of helicopter and aviation night vision technologies and education. We specialize in Federal Aviation Administration-approved NVG training, repair, maintenance, and support solutions.

This version showcases binocular viewing for a more optimized depth awareness. It also has 25-millimeter eyepieces that offer better eye relief, which can accommodate operators who wear eyeglasses.

The night vision goggles F4949 model is USA-made and pass the "Buy American" prerequisites laid out in many government contracts. 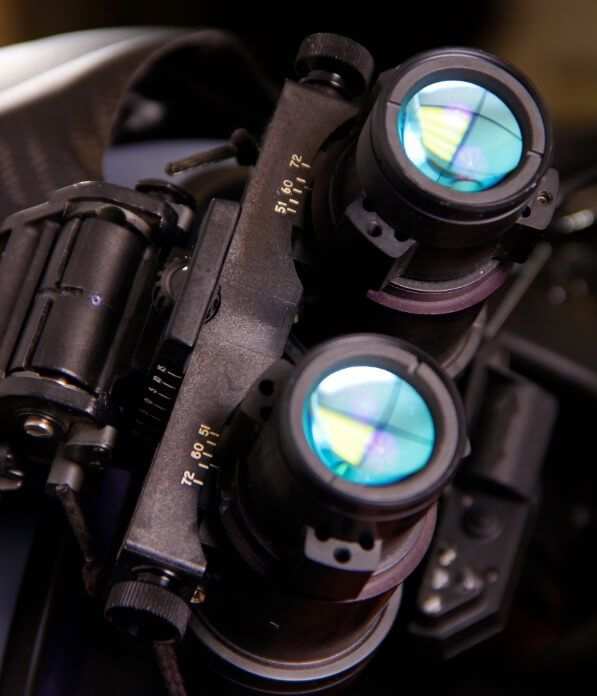 If you're looking for the AN/AVS-9 (Army, Navy, Airborne Vision System) model of aviation NVGs, we have several configurations available.

These configurations allow smooth and safe flight operations, even in meager light conditions. For more information about determining the right setting for your requirements and application or any other questions, please don't hesitate to contact us.

For the best and latest NVG generation, we highly recommend the Generation 3 NVG. If you want to obtain more information on aviation night vision optics, whether it’s Generation 2 or 3, please call us or complete our online form. One of our product specialists is available to help.

Night Flight Concepts is a trusted NVG solutions provider worldwide. We pride ourselves in delivering quality products and services. If you have any questions about our offered NVG solutions, please don’t hesitate to reach out to us.

Is there a Generation 4?

Gen 4 is believed by some to be the latest aviation NVG generation, but that is not the case. Generation 4 NVG was built for military use but later rescinded for not meeting the requirements. The military was in search of a next generation image intensifier that was filmless (removing the ion barrier). In doing so, NVG manufacturers were challenged by maintaining the tube life requirements the military needs.

We’ve been providing Generation 3 night vision to help helicopter and fixed wing airvcraft from military, law enforcement, and emergency medical sectors around the world in their night flight missions

Green-phosphor NVG’s give off the standard black and green appearance you would typically associate with night vision imaging.

Night Vision Goggles for Flying Helicopters and Other Aircraft

Pilots – whether it’s for helicopters or other types of aircraft – count on visual material during operations. The pilot’s visual system is the most vital source of information during flight.

We offer NVG training for Initial Qualification, Recurrent-training, and Instructor Pilot Certification out of our headquarters in Waco, Texas. We can also bring our world-class training to your facilities. For more information, please call us at  (866) 812-6184.

The use of night vision goggles for pilots aids in achieving acute visual perception and better image acuity during night flight operations (or other periods with diminished visibility). At Night Flight Concepts, we understand that night vision for pilots is imperative in the success of the mission.

We make it our mission to provide the best aviation night vision solutions. From aviation NVG goggles to NVG training, to inspection, repair, and maintenance – if you have any aviation NVG-related concern, please don’t hesitate to reach out to us.

The US Army Omnibus contract is what drive NVG manufacturers to make new image intensifiers and military-grade NVG upgrades. Each Omnibus has a minimum night vision goggles military spec manufacturers must meet.

Omnibus continues to dictate the advancement in image intensifier technology since the first Omnibus contract in 1985. As for ANVIS military aviation night vision goggles, Omnibus VII and VIII have the latest requirements.

With helmet-mounted aviation NVG’s, you get full immersion and unsurpassed visibility while keeping your hands free.

A helmet-mounted device is mainly composed of the helmet and goggles. Also, depending on the generation the device is from – whether it’s Generation 1, 2, or 3 – there are a variety of options and solutions you can use.

If you want to know more about helmet-mounted aviation night vision devices, please don’t hesitate to get in touch with us. Our expert team can recommend the best option to match your needs.

At Night Flight Concepts, providing the most revolutionary aviation NVG is our commitment. We’ll be happy to answer any questions you may have about helicopter and aviation NVG and how you can benefit from them.

Let’s take a look at the evolution of these cutting-edge devices. The development and advancement of night vision devices have always been military driven. We all know the advantages of being able to maneuver effectively under cover of darkness.

In the 1950s the U.S. Army first experimented with T-6A infrared driving binoculars. It was a near-infrared (IR) converter that needed an infrared filtered landing light for energy, which in turn did not work well for aviation. During the late 1950s research on the first continuous channel electron multiplier was underway which developed into the microchannel plate. Blackout “Eye” was another IR light sourced head-mounted night vision device.

In the early part of the 1960s, Generation I tubes were developed. The size of the three-stage tubes was too big for head-mounted applications. They were a passive system which meant they operated by just using starlight illumination taking the name “starlight scope.” Foot soldier snipers in Vietnam primarily used them.

Late in the 1960s, the production of microchannel plates allowed night vision devices to be made small enough to be worn on the head. This huge step was termed Generation II. During this period, the NV & EOL used these tubes in goggles for foot soldiers and some aviators for night flight operations.

In 1971 the USAF began using the SU-50 Electronic Binoculars. The Army adopted the Generation II AN/PVS-5 in 1973 as a temporary solution for aviators. It had many known downfalls such as weight, constant refocusing, and visual obstructions, causing discomfort, annoyance, and fatigue. Most cockpits had red incandescent lamps with large red and IR emissions shutting down goggles, so all visible light was reduced below the aviator’s threshold.

Sometimes extinguishing them or putting on a “super dim” setting where crews could not read the instruments. Many accidents caused by lack of peripheral vision with the AN/PVS-5 forced the temporary modification to the faceplate allowing aviators to view below the goggles.

The 1980s brought two versions of ANVIS to military aviators.  The AN/AVS-6(v)1 for helicopter operators which fit on the helmet with a centerline mount and AN/AVS-6(v)2 for AH-1 Cobras only, with an offset mount.

In 1988 an updated MIL-L-85762A was released defining NVIS (night vision imaging system) as a general term replacing ANVIS and expanding the lighting requirements to accommodate various types of NVIS. The use of AN/PVS-5 was continued in aviation until complete fielding of ANVIS. A Congressional Hearing was convened in 1989 to review the safety of NVG’s in military helicopters. ANVIS was deemed necessary.

The 1990s brought Heads Up Display (HUD) systems which allowed aviators to have an out-the-window view yet still monitor instrument symbology within the NVG. Two types of HUD were used. CH-47D and HH-60 aircraft used the AN/AVS-7, and Optical Display Assembly (ODA) was used on the OH-58D. High-speed fixed-wing aircraft incorporated NVG compatible cockpits requiring a different NVG to be safe during pilot ejection.

The AN/AVS-9 (NVG F4949, M949) was developed for the USAF. It was during this period the civilian sector grew interested in NVG’s. The Society of Automotive Engineers (SAE) recommended many lighting practices for NVIS lighting in nonmilitary aircraft.

The Department of Defense (DOD) created JSSG-2010-5 (lighting handbook) as guidance for interior/exterior lighting and display equipment. The requirements from MIL-L-85762A were still used, but this new document provided guidance rather than specifications.

MIL-STD-3009 in the 2000s was created to define the performance requirements standard. It extracted requirements from MIL-L85762A and JSSG-2010-5. SAE wrote ARP-5825 covering design and test procedure requirements for dual mode exterior lights.

With an effective date of 30 September 2004, the FAA introduced Technical Standard Order (TSO) C164. It covers the minimum performance standards manufacturers must meet for approval and identification with the applicable TSO. TSO C164