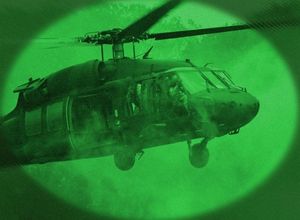 Helicopter night vision goggles? Aren’t those for the police and military? Not anymore! On the 29th of January, 1999, the FAA issued the first Supplemental Type Certificate (STC) to permit night vision goggles by a civilian helicopter EMS (emergency medical service) operator.

Ever since then, many more have been issued to other commercial operators. In addition, rulemaking was started (but at the time of this writing is temporarily on hold) for modifications to FAR Part 91 that would permit the use of this technology by general aviation pilots.

Considering this, it will only be a matter of time before pilots begin hearing more and more about these noteworthy aids to night flying. Therefore, pilots need to become aware of the helicopter night vision goggles technology and understand some of the basic operational issues.

What are Helicopter Night Vision Goggles?

These photons of light energy are directed to an electronic processing unit called the image intensifier, which contains several components. The photocathode element in the image intensifier converts the light photons to electrons and moves them to the microchannel plate (MCP), which accelerates and multiplies them several thousand times.

The electrons then strike the phosphor screen, which is ultimately responsible for emitting the visible light the user will see through the eyepiece lens as a focused image.

Unlike a regular video camera, helicopter night vision goggles do not require much light to produce an image.

Light as faint as starlight or low-level moonlight will suffice. However, the efficiency of the equipment will be degraded in total darkness or with too much light. The image intensifier will increase what little light energy there is on average several thousand times. State-of-the-art helicopter night vision goggles can intensify on the order of 35,000 times or more.

That amplified or intensified energy is projected onto the phosphor screen, which creates the visible image the user sees through the eyepieces. The helicopter night vision goggles image is monochrome, i.e., in one color, typically green or amber, depending on the type of phosphor used. NVG equipment cannot produce a multi-color representation of a scene.

Helicopter night vision goggle models are helmet-mounted with electrical power supplied by a battery pack attached to the back of the helmet. As with any optical device, the user has a variety of ways of adjusting fit and focus. The helicopter night vision goggles and mounting assembly are bulky, weighing approximately one pound. In addition, one must factor in the helmet’s weight and battery pack.

The advantages of this night vision aid technology in aviation can be summed up as an increase in nighttime situational awareness for pilots. This technology doesn’t turn night into day, but it does allow the user to look at objects that normally wouldn’t be seen by the eye alone. That would markedly decrease the possibility of collisions with terrain or artificial obstructions. A lot of other benefits exist. However, the bottom line is that this technology, when properly used, has the potential to increase nighttime flying safety significantly.

Present helicopter night vision goggles provide approximately 40-60 degrees of the aided nighttime circular field of vision. However, the user retains some unaided vision by looking peripherally around or beneath the goggles. With a decreased field of vision, effective scanning techniques are even more important than with unaided vision alone. Because a person is looking at an electronic image, depth perception is absent.

The user should learn to know terrain contrast and shadow to replace a few of the lost depth perception guides. Thus, the pilot’s capability to determine precise closure on terrain or other aircraft when these are first detected is limited.

Low-light level operations produce decreased visual resolution, acuity, and contrast, complicating hazard recognition. Visual acuity from helicopter night vision goggles gives a vast update over unaided human night vision, which could be 20/200 or worse. With well-focused goggles at starlight or quarter moon, a person can have nighttime visual acuity equivalent to 20/40 or 20/30. The latest goggles can achieve 20/25; however, this is difficult to accomplish in an operational setting.

As told before, helicopter night vision goggles produce monochrome images. Because the eye can differentiate more shades of green than other phosphor colors, the night vision phosphor screen is typically green. That enables the user to view more detail but cannot detect color differences.

Changing cockpit lights to suit these goggles is very expensive and complicated. Helicopter night vision goggles are light-sensitive, ranging from wavelengths of yellow-green to near-infrared. FAA necessitates aircraft position, and anti-collision lights could cause problems for goggle wearers. They are also subject to interference by environmental factors, such as rain, clouds, snow, mist, dust, smoke, and fog. These will severely degrade the equipment’s performance in anything more than very small amounts.

Operational use of these devices must be accomplished only after pilots have received thorough, supervised ground and in-flight practice with the equipment. After getting trained, pilots must strive to maintain proficiency through ongoing use and recurrent training.

In the USA, you’re allowed to use night vision equipment unless it’s approved. This is applicable to all states of the United States except California, where it’s partially prohibited.

Can civilians own night vision goggles?

Yes, here in the US, citizens may own and use helicopter night vision goggles. However, it’s prohibited to take these devices out of the country, unless approved by the U.S. State Department with due licensing.

Thank you for contacting us! A representative of Night Flight Concepts will be in touch soon.